Centering around a happy-go-lucky dance hall girl named Charity Hope Valentine, and her string of woe-begotten relationships, Sweet Charity asks you to throw away your sense of disbelief that anyone could be quite so wilfully, blindly optimistic. It paints its young heroine’s story in broad, colourful strokes—realism be damned. 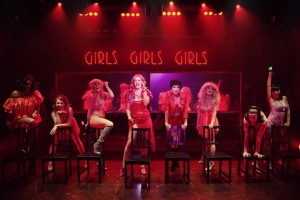 Writer Neil Simon took inspiration from Fellini’s 1957 film Nights of Cabiria, right from the opening scene in which the heartless ‘john’ pushes our naïve heroine into the river, so as to rob her purse… but instead of the proud, defiant street-walker Cabiria (played by Giulietta Masina in Fellini’s film), we get the super-sweet hopeless romantic Charity Hope Valentine; instead of loutish playboy Alberto Lazzari, who Fellini paints as the cad he is, we get the sympathetic, swoon-tastic Vittorio Vidal, who is so charming that we almost don’t mind that he exploits Charity’s situation and then makes her hide in the closet all night while he has sex with his girlfriend.